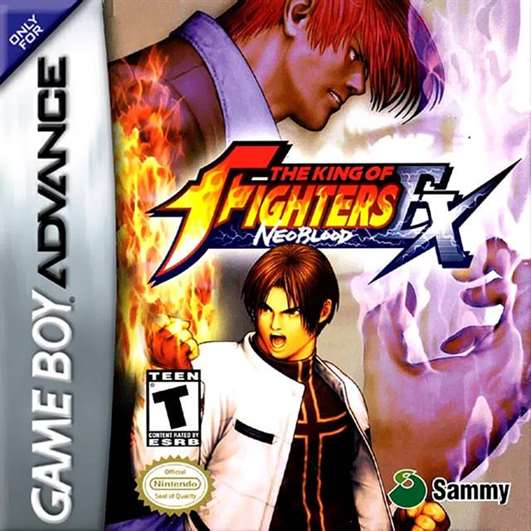 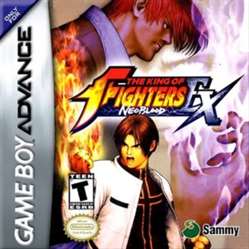 Game Boy Advance owners have seen a lot of great fighting games.  From Street
Fighter II: Turbo to Tekken Advance, gamers no longer have to stay home to get
their fighting game fix.  Adding to the list of stellar games is Sammy, who
has brought SNK’s stellar King of Fighters series to everyone’s favorite
portable game system.  Although pocket-sized, The King of Fighters: NeoBlood
EX’s fun is as big as some of the best console fighting games available.

To the uninformed gamer, the
KoF series may appear to be a major Street Fighter knock-off.  If the only
characters you’re familiar with are Ryo, Chang and Andy, you’d be right.
Those characters mimic at least some of Ken, Zangeif and Ryu’s moves,
respectively.  But the other characters, especially the female fighters, are
much more unique than that.  Moe has a nice array of kick and punch attacks
that are ever-so-slightly reminiscent of Xiayou (from Tekken).  She has very
little in common with the ladies of Street Fighter, except for the fact that
most of her moves are performed with rolling motions (this is true for all the
characters in the game).  Mai is another unique character.  She uses fans like
Kitana from Mortal Kombat, but her attacks are almost entirely physical; Mai
can throw one of her fans for a quick attack, but her strength comes in the
form of her ability to get up close and personal with her opponents and win.
Leona is another great physical fighter, using a fake (but cool-looking) kick
boxing style.  There are 18 fighters in all, most of which have a great (but
small) list of unique special moves and attacks.
Download Rom