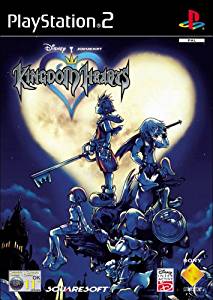 Kingdom Hearts is the first project from Squaresoft and Disney Interactive. This revolutionary relationship has created an entirely new genre of game–an action RPG that combines classic Disney characters and worlds with new elements created in the renowned Squaresoft style. Kingdom Hearts tells the story of Sora, a 14 year old boy whose world is shattered when a violent storm hits his island home. The storm separates Sora from his friends, Riku and Kairi, and they are scattered to strange and unknown worlds. While searching for his friends, Sora meets Court Wizard Donald and General Goofy. They are the protectors of the magical Disney Castle and are on a mission to find King Mickey, who has disappeared in mysterious circumstances. They learn that some sinister creatures – known as The Heartless – are placing all of their worlds under threat. The Heartless are on a mission to recruit Disney villains to help them steal the pure hearts and souls of others. Now Sora must join forces with Donald, Goofy and many more Disney heroes to fight The Heartless and end their reign of tyranny. But his path will not be easy, and before he is able to return home, he will be forced to make the hardest decision of his life… Kingdom Hearts is an epic tale of adventure, heroism and, ultimately, sacrifice. Squaresoft and Disney invite players to embark on a fantastic journey, explore strange and familiar worlds, meet old and new friends, and make amazing discoveries at every turn.