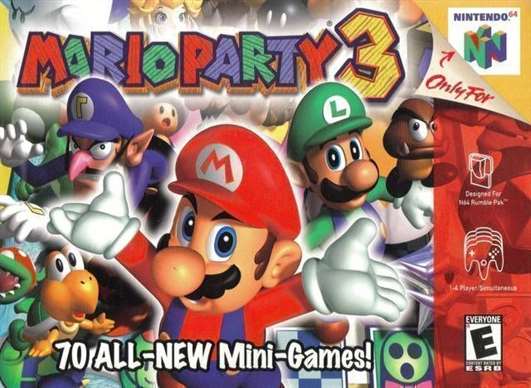 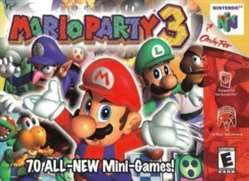 Mario Party 3 (Japanese: マリオパーティ3 Hepburn: Mario Pāti Surī) is the third in a series of board game style video games for Nintendo platforms, featuring popular Nintendo characters. It was released for the Nintendo 64 in Japan on December 7, 2000, followed by a North American release on May 7, 2001. It was released in Australia on September 3, 2001 and in Europe on November 16, 2001.

Mario Party 3 is the third and final Mario Party title for the Nintendo 64 and the final first-party game released for the console. The player can choose between eight playable characters: Mario, Luigi, Princess Peach, Yoshi, Wario, Donkey Kong, and newcomers Waluigi and Princess Daisy. Mario Party 3 features duel maps, in which two players try to lower each other’s stamina to zero using non-player characters such as Chain Chomps. It is also the first Mario Party game to have multiple save slots. The game is also notable for allowing characters to have three items at once instead of only one. It is the third game in the Mario Party series. Mario Party 3 is followed by Mario Party 4.