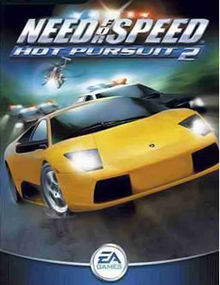 The player in pursuit of a speeder, having called for backup in the form of an additional police unit.
Hot Pursuit 2 draws primarily from the gameplay and style of Need for Speed III: Hot Pursuit; its emphasis was on evading the police and over-the-top courses featuring lengthy shortcuts.

As with the original, the player also has the option to play as a police officer trying to arrest speeders. To do so the player rams the speeding vehicle multiple times to disable it. The player must turn on their lights and sirens while in pursuit, and they automatically turn off after arresting the suspect. Police can call for a barricade, additional units, “Unit 9” in broadcasting assistance (PS2 only), spike strips, and request help from a helicopter to assist in chasing the target vehicle. At the end, the player is awarded for the cars busted. In the PlayStation 2 version this mode is called “You’re the Cop” mode while in the PC, GameCube, and Xbox versions it’s “Be the Cop” mode.

NFS Edition cars, which are slightly modified versions of the originals, are also in this game. However, the BMW cars didn’t get their corresponding NFS Edition remakes. This was because of a licensing policy by BMW that restricted unauthorized vehicular modifications. Also in the PS2 version, the Ferrari 360 Spider didn’t get its corresponding NFS Edition remake as well due to the Ferrari 360 Modena Challenge as an alternative and that car is a PS2 exclusive whereas it was not available on the other versions, instead, they had the NFS edition 360 Spider.

Races take place in four environments which differ in atmosphere, with a handful of courses per environment. The different courses in an environment are formed by different roads being connected or separated by road blocks. A fictional tropical island, reminiscent of Hawaii, is the most varied environment; the track traverses a city, volcano, waterfall, beach, rainforest, and two villages. The coastal forest environment, reminiscent of the Washington coast because of its forest and nature, sometimes has foggy weather, but this does not effectively limit visibility during races. The Mediterranean coast which resembles Greece because of the stadium and a building which resembles Parthenon and so-called Alpine environments that resemble Alaska are more homogeneous, with little variation except the occasional short cut. The PlayStation 2 version also contains a Desert environment resembling the Sonoran Desert of Arizona that sometimes has thunderstorms in the North American Monsoon. Compared to the original Hot Pursuit, which features weather and day/night variation independent of track, and widely varying environments from snowy mountains over cities to desert, Hot Pursuit 2 courses have significantly less variation.