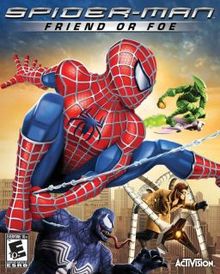 Spider-Man: Friend or Foe was originally announced via a promotional page on the back of the Spider-Man 3 video game instruction booklet. The teaser stated that the game would be “A new twist on the legend. A new take on the movies.” The game’s website shows a few screenshots of the game and the Green Goblin makes an appearance.[1] The game has a very different engine and style as compared to the previous official film tie-ins.

According to the company report, Spider-Man: Friend or Foe is a unique take on the media franchise. Based on the films Spider-Man, Spider-Man 2, and Spider-Man 3, this action game reinterprets big-screen moments and battles with a humorous twist. Players team up with famous heroes from the Marvel Comics universe to combat villains and then convert them to sidekicks after defeating them in epic boss battles.[2] The game includes a co-op multiplayer mode, as Spider-Man or a sidekick, in locations around the globe, including Tokyo, Egypt, and Nepal.[3]

Spider-Man: Friend or Foe, along with most other games published by Activision that had used the Marvel licence, was de-listed and removed from all digital storefronts on January 1, 2014.[4][5]

In an opening cutscene, Spider-Man finds himself beset by his enemies from the films: Green Goblin, Doctor Octopus, Sandman, and Venom. He gains help from New Goblin as he combats the villains. All six characters suddenly find themselves targeted by an enemy force and one-by-one, the villains and New Goblin begin disappearing. Meanwhile, Spider-Man is rescued by Nick Fury of S.H.I.E.L.D., who informs him that the meteor which brought the Venom symbiote to Earth had broken up in the Earth’s atmosphere and five more pieces had landed in numerous locations across the globe. Fury sends Spider-Man to retrieve the shards of meteors. Spider-Man quickly finds that the villains who attacked him and several more of his foes, including Rhino and Scorpion, have been placed under mind control of a mysterious villain. The villain also creates and controls holographic/symbiote combination foot soldiers called P.H.A.N.T.O.M.s (Perpetual Holographic Avatar Nano-Tech Offensive Monsters). As Spider-Man fights his enemies one-by-one and rescues them from the mind control, they promise to aid him in finding the villain responsible. As Spider-Man progresses, he obtains more allies such as Black Cat, Iron Fist, Silver Sable (only playable in Microsoft versions), Prowler, Lizard (not portrayed as a villain), and Blade. He discovers that the evil genius is Mysterio (whom Venom refers to as “bubbleman”), who intends to use his army to take over the world, using each shard of the meteor to make them stronger. Spider-Man decides to temporarily don the Black Suit for the final battle. Ultimately, Spider-Man defeats him and turns the shards over to Fury, who decides to analyze them and refers to the study as “Project Carnage” although the character himself is not featured, except in the PSP version. Even though she does not appear in the game, Madame Web is mentioned when the computer says she is here for Nick’s 4:00 meeting