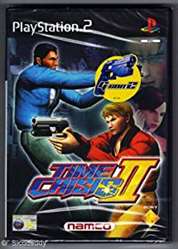 The long-awaited full sequel to one of the original PlayStation’s best pure arcade games arrives in the shape of Time Crisis 2, instantly bringing PlayStation 2 gamers an even stronger adrenaline rush of utter gaming heaven. You’ll need a lightgun to play it properly–the G-Con 2 is highly recommended–and once you’re kitted up you’re launched straight into the frenetic action. Complete with a hokum mission about saving the day, the aim is to shoot the bad guys, while leaving the innocent–including your partner–out of the line of fire. There’s so much to follow on screen and such addictive gameplay that you simply can’t help but have fun. For added enjoyment you can invest in another lightgun and play with a second player, which you’ll end up doing until your fingers bleed.

Things aren’t entirely perfect, of course. Like the first incarnation, the game is quite short, and it won’t take too long to get through the handful of levels provided. Furthermore, the one-player game doesn’t hold an enormous amount of long-term appeal. Ultimately though, this is one of the best pick-up and play game on the PlayStation 2. No doubt it will be surpassed in due course, but if you enjoy high-quality arcade games, you absolutely need Time Crisis 2. It really is as simple as that. —Simon Brew