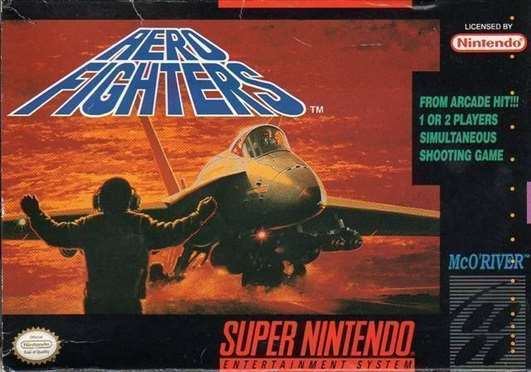 Aero Fighters, known as Sonic Wings (ソニックウィングス Sonikku~uingusu) in Japan, is a vertical-scrolling shoot ’em up arcade game originally released in 1992 by Video System and ported to the Super Nintendo Entertainment System in 1993. It was the first in the Aero Fighters series, and a spiritual successor to the 1991 Turbo Force.

This game uses basic shooter mechanics. Press button 1 to fire normal weapons; this can be upgraded by collecting P or the rare F items, though the maximum power level has a hidden ammo count, after which you will return to the previous power level. Press button 2 to use a powerful special attack; uses are limited to how many B items you’ve collected (every life starts with two). Some ground enemies will drop score items when destroyed; they appear as the currency of the selected character’s nation. By default, you start with three lives, and can acquire one more at 200,000 points.

Aero Fighters is famous for its large cast of characters, unheard of in 1992. Each pair of characters represents one of four nations. The two player sides may only select the four characters given (one for each nation). In a two player game, only a single nation can be chosen.