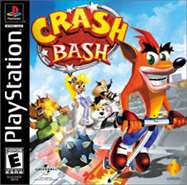 The forces of good and evil meet once again to do battle for control. Aku-Aku summons his old friend Crash Bandicoot to join him in the ultimate battle… Crash Bash is the crazy-mad party game for up to four players where anything goes–shove your enemies off the edge into the abyss, smack them, kick them, blow them up and win, win, win!