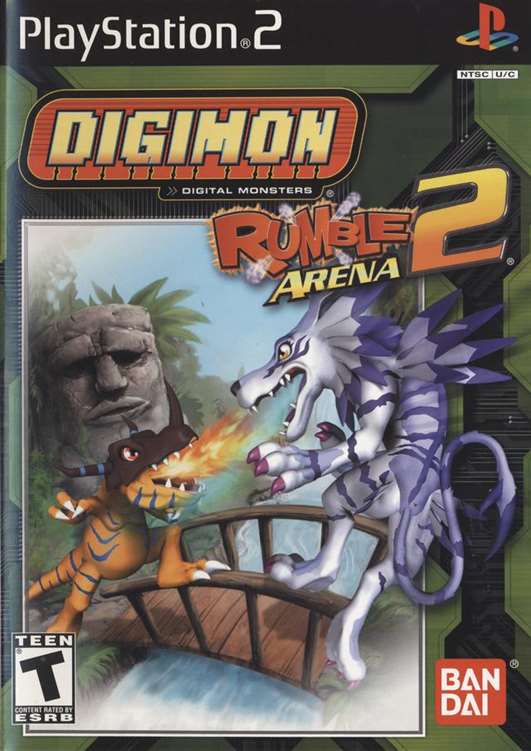 Digimon Rumble Arena 2, known as Digimon Battle Chronicle (デジモンバトルクロニクル Dejimon Batoru Kuronikuru) in Japan, is a 2004 Digimon fighting video game released by Bandai for the PlayStation 2, GameCube, and the Xbox. It is the sequel to Digimon Rumble Arena and has a similar style of gameplay as Super Smash Bros. Melee, except with a health meter.Story
Digimon Rumble Arena 2 is based on the Digivolving techniques of Digimon battling it out in a battle royale and to see who is the strongest Digimon.

Characters
Main characters
The game features characters from the first four seasons of the anime: Digimon Adventure, Digimon Adventure 02, Digimon Tamers, and Digimon Frontier. Each one has their own special moves and “digivolutions”, as well as slightly varying normal attacks and taunts.

Agumon: A mix of weak and strong attacks, but good variety in his Pepper Breath attack. He digivolves to Greymon and then WarGreymon.
Gabumon: A slow, but very offensive oriented Digimon. His digivolutions are Garurumon and then MetalGarurumon.
Biyomon: Has an advantage with speed, but low on offense and defense. Biyomon digivolves to Birdramon and then Garudamon.
Tentomon: Slow on his wings but also fast and strong in both offense and defense, Tentomon can digivolve to Kabuterimon and MegaKabuterimon.
Palmon: Fast and attacks with poison and dust of sleep. Togemon and Lilymon are the digivolutions.
Gomamon: Weak offense, but fast. Gomamon digivolves to Ikkakumon and then Zudomon.
Patamon: Lowest statistics, but the fastest character in the entire game. Patamon digivolves to Angemon and MagnaAngemon.
Gatomon: Lowest fastest on character in the game who can also paralyze enemies. Her digivolution line consists of Nefertimon and Angewomon.
Veemon: Short range on all attacks, but very powerful. His Vee-Knock-Out, and Vee-Punch moves can be very harmful. Flamedramon and Imperialdramon Fighter Mode are the digivolutions.
Guilmon: Somewhat weak physically, but moves very quick on his feet. His special attack, Pyrosphere, moves forward and has a bit of a setback. His digivolutions are Growlmon and Gallantmon.
Flamemon: Has low defense, good offense and good speed. He can digivolve to Agunimon and then BurningGreymon.