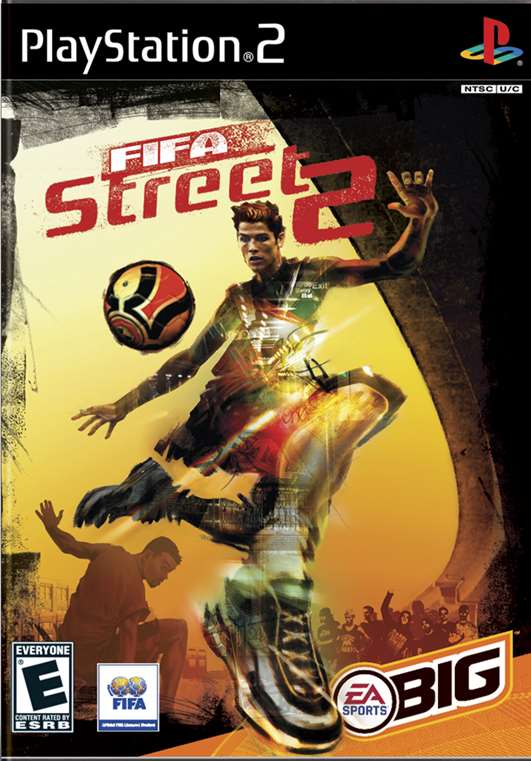 FIFA Street 2 is the 2006 sequel to the EA Sports video game FIFA Street. A new “trick stick beat” system was introduced and new authentic tricks were also introduced. The game was released for the GameCube, Nintendo DS, PlayStation 2, PSP, Xbox, and mobile phones. The player on the game cover is Portugal international Cristiano Ronaldo.

The home console editions of the game received average reviews for the improvements on the first FIFA Street. However, the hand-held versions, particularly on the DS, were received poorly for not including those innovations.

The player is playing as Portugal, and the icon in the bottom-left indicates that they are controlling Deco. Each team’s score in points is at the top of the frame, and the score in goals at the bottom.
The game is a street football game in which the player can take control of 4-a-side versions of national football teams in matches where the object is to win by scoring a set number of goals or points via tricks, or within a time limit. In the career mode “Rule the Streets”, one creates a player and competes in tournaments around the world to obtain “Skill Bills” to buy clothing and upgrade his rating. As the player improves, he can captain his own street football team and eventually become an international. The best players have special moves often named after their nickname.

Legends of football such as Zico, Carlos Alberto Torres and Abedi Pele are unlockable during the game.

The game has its own in-game radio station, presented by Zane Lowe formerly of BBC Radio 1 and featuring music by artists such as Roots Manuva, Sway, Pendulum, Editors and The Subways.

The game received “mixed” reviews on all platforms except the DS version, which received “unfavorable” reviews, according to video game review aggregator Metacritic.

The A.V. Club gave the game a B and stated, “Defending against tricks can be like a clumsy piece of physical comedy. When you aren’t paralyzed, you fall flat on your face.”However, The Times gave the PS2 and Xbox versions three stars out of five and said that it “falls down in one vital aspect — namely[,] the art of defending