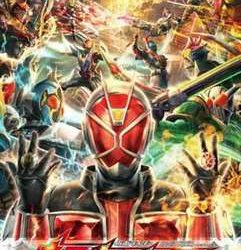 Combat in the game operates on a basic three-button system, encompassing Weak Attacks, Strong Attacks, and Special Attacks (such as the various Rider Kicks). In addition, many Riders have the ability to perform a Form Change once the Rider Gauge at the bottom of the screen fills by dealing or receiving damage, or by charging the meter. Form Change can be used as a counterattack or to extend combos. A number of Riders also have the ability to summon Strikers, such as Ryuki’s Contract Monster Dragredder or Den-O’s DenLiner. Also, each Rider has a unique finisher called ‘Rider Finale’. This attack can only be activated when the ‘Rider Gauge’ is full and the R2 button is pressed.