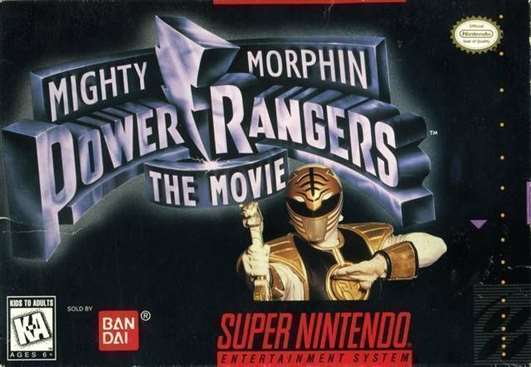 The Super NES version is a side-scrolling action game similar to the previous SNES game based on the series. The game can be played by one or two players with six available characters. Billy and Kimberly return from the previous game along with the introduction of Tommy, as the White Ranger (opposed to appearing as Green Ranger), three new rookie rangers, Rocky, Adam, and Aisha, who replaces Jason, Zack, & Trini from the original game.

The player begins each stage as his or her character’s civilian persona. The player can fill up a “Morphing meter” next to their life gauge by picking up thunderbolt-shaped items (whether by small bolts or morphing sign bolts). These items are dropped by enemies and can also be used to perform a special attack when the character is morphed in Ranger Mode. A Special code made for the game can have the players begin the stages as the morphed Rangers instead of their civilian persona. Once the Morphin’ meter is filled, the player can press the special attack button to morph; an animated sequence begins showing the rangers morphing in a digitized video (Based of the Season 2’s transformation without showing the Red Ranger helmet configuring at the end). The method also occurs automatically after the player goes throughout the mission in civilian mode encountering the boss triggering the morph sequence (regardless of how much energy of the morphin’ meter is filled up).

The game consists of seven stages. The player fights against Lord Zedd’s Putty Patrol until reaching the end of stage boss. The first five bosses are all monsters from the TV show’s second season, while the sixth one is an original creation for the game. The final boss is Ivan Ooze, the film’s antagonist. Unlike the first game, there are no giant robot battles in this version, although the Ninja Megazord from the film (and the show’s third season) makes an appearance during the ending sequence.

The four reviewers of Electronic Gaming Monthly considered the game a mediocre Final Fight clone which has decent graphics but suffers from a lack of variety of both moves and enemies. They scored it a 5.875 out of 10.[4] In contrast, GamePro commented “With better gameplay, better Ranger graphics, and two-player simultaneous action, this sequel’s perfect for fanatic fans and a fun once-through for other gamers.” They particularly praised the multi-plane action, the simultaneous two player mode, and the accessible difficulty and controls.