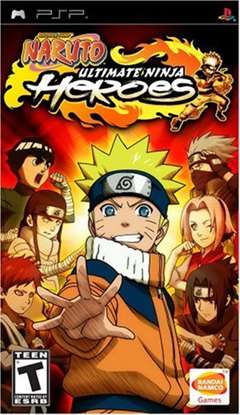 Finally, the Ninja heroes can battle anywhere, anytime! The ultimate battle of heroes will take place without boundaries!

Exclusively developed for the US and European markets, NARUTO: Ultimate Ninja Heroes is the first ever Wi-Fi enabled fighting game based on the Naruto universe on PSP delivering both intense single and multiplayer team based fighting experience! For the first time, you can create your dream squad of powerful ninja from the rich universe of Naruto to battle against your friends and trade your player profile via ad-hoc connection. Power-up your favorite characters to create your own custom ninja. Form your favorite ninja team as it appears in the cartoon or create the ultimate dream team to take on your rivals! There are 20 playable characters and 8 interactive stages to battle on. Soar through the ninja ranks to become the ultimate Hokage!