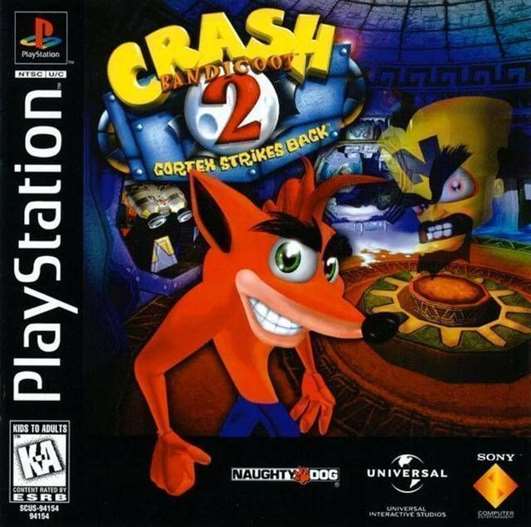 Crash Bandicoot 2: Cortex Strikes Back is a platform video game developed by Naughty Dog and published by Sony Computer Entertainment for the PlayStation. It is the second game in the Crash Bandicoot series, and the sequel to the original game.

Taking place on a fictional group of islands near Australia, Crash Bandicoot 2 follows the adventures of the anthropomorphic bandicoot Crash. Crash is abducted by series villain Doctor Neo Cortex, who tricks him into thinking he wants to save the world. Crash is thrust into several parts of N. Sanity Island in order to gather Crystals that will allow Cortex to contain the power of an upcoming planetary alignment and keep the planet from being destroyed. Crash’s sister Coco and Cortex’s former assistant Doctor Nitrus Brio try to warn him about Cortex, with the latter urging Crash to gather gems instead of crystals.

Cortex Strikes Back received generally favorable reviews from critics and was considered to be superior to its predecessor. Much of the praise went to the game’s graphics, control and music, with major criticisms varying between the trial-and-error gameplay, lack of level variety, easy boss levels and lack of innovation. The game went on to become one of the best-selling PlayStation video games of all time and replaced its predecessor as the highest-selling Western title in Japan at the time, selling more than 800,000 copies in the country by April 1998. A remake version was included in the Crash Bandicoot N. Sane Trilogy collection, released on the PlayStation 4 in June 2017, and ported to other platforms in June 2018.