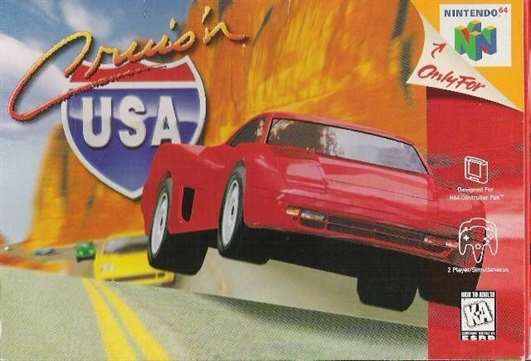 Cruis’n USA is an arcade racing game originally released in 1994. It was developed by Midway Games and published and distributed by Nintendo. It is the first game in the Cruis’n series and features locations around the United States.

Although Cruis’n USA was advertised as running on Ultra 64 hardware (based on the Nintendo 64’s hardware), it was actually implemented on the Midway V-unit hardware. The hardware consisted of a TMS32031 CPU clocked at 50 MHz, an ADSP-2115 DSP clocked at 10 MHz for sound and a custom 3D chip that could render perspective-correct but unfiltered quads at a high resolution (512 x 400 pixels).

Along with Killer Instinct, it was planned as a launch title for the Nintendo 64. Neither game made it out for Nintendo 64’s launch, however.

Gameplay
Like in most racing games, players race down one-way courses consisting of streets vaguely based on real-life locations. While racing, they do their best to avoid various road hazards such as oncoming traffic and construction. Players chose between seven different cars to race with. The car can simulate either an automatic or manual transmission. Automatic increases the speed of gear shifts, while players using the manual transmission must switch during races. The environments of the tracks range from Golden Gate Park to Washington DC. Players must reach first place to move on to the next track. Unlike most racing games, there is the option to change the music by pressing the music button. Whenever a race is completed, the player unlocks either a new vehicle or a new color, depending on the difficulty completed. Each new color represents a performance upgrade, as indicated in the specifications when selecting a vehicle. Players have the option to select the color of the car that they choose to play, with each color being a higher or lower spec.