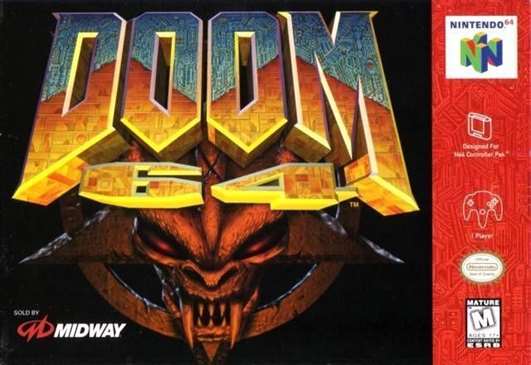 Doom 64 plays similarly to earlier games in the Doom series; the player must advance through 32 levels battling demons, collecting weapons and keys, and activating switches in order to reach the level’s exit while surviving deadly ambushes and traps. Changes were made to the Doom engine for use in Doom 64, and gameplay elements were altered.

Weapons
All the weapons from Doom II are present,[1] but redrawn with new sprites and sound effects.[2] The chainsaw has two blades instead of one, the fists have bloodstained gloves instead of brass knuckles, the plasma gun has an electric core that emits a sparking sound when equipped, the rocket launcher has a small kick when fired, pushing the player back slightly, the shotgun’s priming handle is at the grip instead of under the barrel, and the double-barreled “Super” shotgun reloads faster and causes recoil.

A new weapon known as the Laser, or “Unmaker”, was added, using the same cell ammunition as the plasma gun and BFG 9000. It was first mentioned in the Doom Bible and was planned to be featured in the PC Doom games, but never appeared. Its appearance in Doom 64 is its only official appearance. With the power of three ancient artifacts found in the game, it becomes more powerful by shooting three laser beams (at a quicker rate than default) instead of one. The first artifact increases the laser speed, the second artifact adds a second laser, and the third artifact allows the weapon to fire three simultaneous lasers which can automatically aim separately from one another, allowing the weapon to attack three different enemies at once.