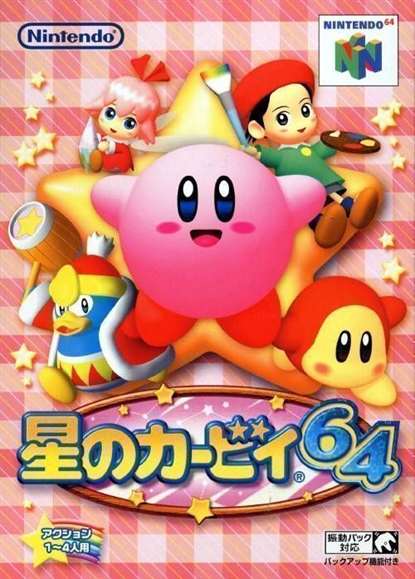 Kirby 64: The Crystal Shards[a] is a side-scrolling platform game in the Kirby series developed by HAL Laboratory and published by Nintendo for the their Nintendo 64 home video game console. It is the sequel to Kirby’s Dream Land 3.

Gameplay
Kirby 64: The Crystal Shards is a side-scrolling platform game with gameplay similar to previous Kirby games where the titular character Kirby has the ability to inhale enemies and objects and extract their abilities. Kirby travels across six planets, which consist of separate levels, and collect the scattered pieces of a Crystal, which is used to defeat the game’s main villain, Dark Matter.

Copy ability
There are seven different copy abilities in Kirby 64, and any two can be merged to create a new one. The seven basic abilities are Burning, Stone, Ice, Needle, Bomb, Spark, and Cutter.[1] Though Kirby only needs one element in his body to gain an extra attack, copy abilities can also be merged with abilities of the same type for more powerful versions of the basic abilities. In total, there are 35 abilities to combine and stand-alone.[citation needed] Usually, combined ones are stronger or have added effects. This is the only game in the Kirby series where Kirby can directly combine copy abilities (save for the very restricted combinations with the Sword and Bomb abilities in Kirby: Squeak Squad and status additions in Kirby Star Allies).