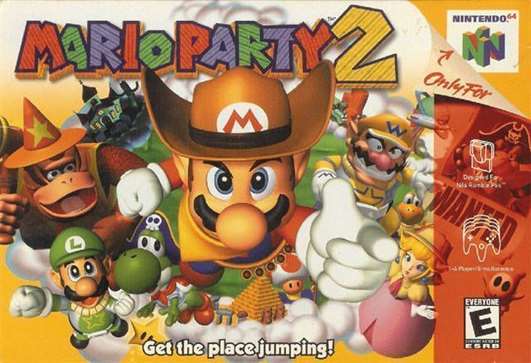 Mario Party 2 (Japanese: マリオパーティ2 Hepburn: Mario Pāti Tsū) is a board game-style party video game developed by Hudson Soft and published by Nintendo for the Nintendo 64 video game console. The game was first released in Japan in December 1999 and in other regions in 2000. The game is the direct sequel to Mario Party and is the second game in the Mario Party series, followed by Mario Party 3.

Mario Party 2 features six playable characters: Mario, Luigi, Princess Peach, Yoshi, Wario and Donkey Kong from the Mario series, who can be directed as characters on various themed game boards. The objective is to earn the most stars of all players on the board; stars are obtained by purchase from a single predefined space on the game board. Each character’s movement is determined by a roll of a dice, with a roll from each player forming a single turn. Each turn in Mario Party 2 is followed by a minigame, which is competed to earn money (10 gold coins, in most cases) for the character, used to buy items and stars. The game was also released on the Wii Virtual Console title in Japan in late 2010, and for the Wii U Virtual Console in North America in December 2016