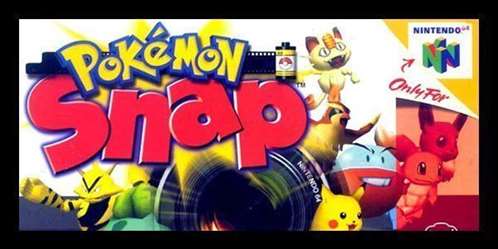 Pokémon Snap (ポケモンスナップ Pokemon Sunappu) is a first-person rail shooter and simulation video game co-developed by HAL Laboratory and Pax Softnica and published by Nintendo for the Nintendo 64. It was first released in Japan in March 1999, and was later released in June 1999 in North America and in September 2000 for PAL regions. It is a spin-off game in the Pokémon series, being one of the first console-based games for it, and featuring many Pokémon rendered for the first time in real-time 3D. The game was re-released for the Wii’s Virtual Console in December 2007 as well as Wii U’s Virtual Console in 2016.

Originally announced as a Nintendo 64DD title, development of Pokémon Snap was moved to the Nintendo 64 due to the 64DD’s delays. The gameplay is similar to other first-person games, viewing from the perspective of protagonist Todd Snap as he moves automatically on a rail. The objective of the game is to take pictures of Pokémon, using items such as apples and “pester balls” to achieve better shots. After each round, players are judged based on the quality of their photos. The Virtual Console version features the ability to send pictures taken in the game to the Wii Message Board and send them to friends, whereas the Nintendo 64 cartridge could be taken to either Blockbuster or Lawson stores in North America and Japan to have pictures from the game printed on stickers.

Its release was promoted heavily by Nintendo, including being featured in more than 86,000 hotels, and a contest to send the winner to Australia. By the end of 1999, Pokémon Snap sold 1.5 million copies, and was a strong rental title in 1999 after its release. It was met with a mostly positive reception by critics, described as “addictive” by IGN and Boys’ Life, and “innovative” by Electric Playground. It has also been compared to other video games with photography, such as Afrika, Dead Rising, and Beyond Good & Evil. It has also been used as a notable example of video games with photography.