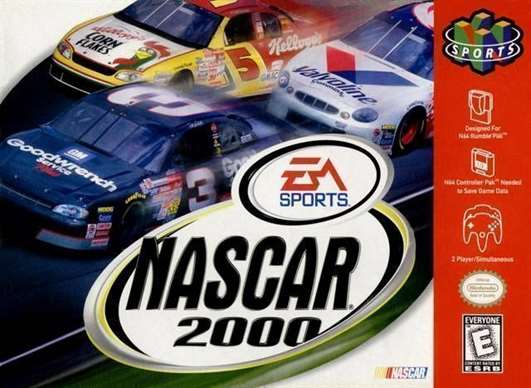 NASCAR 2000 is a racing simulator video game developed and published by EA Sports and co-developed by Stormfront Studios.[1] The game was released in 1999 for the Nintendo 64 and for the PlayStation, 2000 for the PC and for the Game Boy Color. The game is based on the 1999 NASCAR Winston Cup Series. The game, along with NASCAR 98, is regarded as one of the best of EA Sports NASCAR series of video games. It was the last game for PC, it would not appear on NASCAR 2001 until NASCAR Thunder 2002. This game was the third of the series.

IGN.com said for the PlayStation version, “As they say, fans of the genre are going to love this great new update. All else, stay away.” They awarded this version a 7.0 (Good).[6] For the PC version, IGN.com stated, “Get ready … there’s a left turn coming up.” They awarded this version a slightly higher score of 7.2 (Good).[7] For the N64, IGN.com weren’t too nice this time stating, “Stock car racing might be redundant but a videogame shouldn’t be.” This version only scored a disappointing 6.5 (Okay).[8] Finally, IGN.com reviewed this game one last time with the GameBoy color version, stating “Not for everybody (and probably shouldn’t be for anybody), but THQ’s NASCAR runs well on cheap gas.” GBC version scored same as the PS version with a 7.0 (Good)