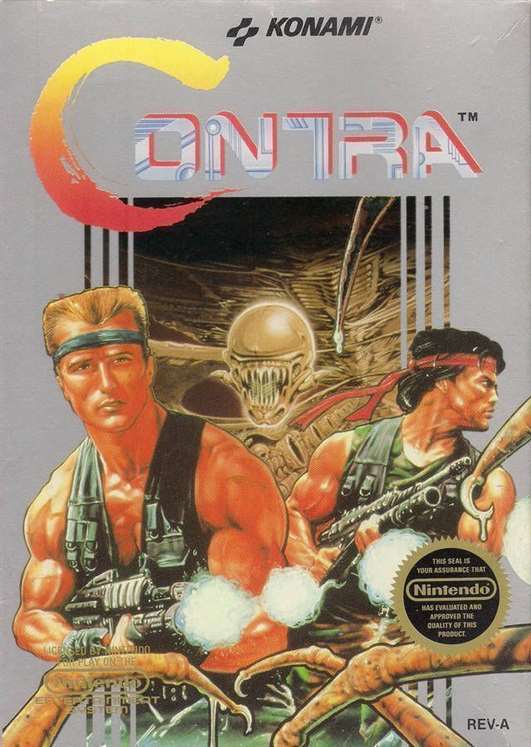 Contra[a] is a run and gun video game developed and published by Konami, originally released as a coin-operated arcade game on February 20, 1987.[3] A home version was released for the Nintendo Entertainment System in 1988, along with ports for various computer formats, including the MSX2. The home versions were localized in the PAL region as Gryzor on the various computer formats and as Probotector on the NES, released later. Several Contra sequels were produced following the original game.

Bill and Lance reach the entrance of the second enemy base in the arcade version of Contra.
Contra employs a variety of playing perspectives, which include a standard side view, a pseudo-3D view (in which the player proceeds by shooting and moving towards the background, in addition to left or right) and a fixed screen format (in which the player has their gun aimed upwards by default). Up to two people can play simultaneously, with one player as Bill (the blond-haired commando with the white tank top and blue bandanna), and the other player as Lance (the shirtless dark-haired commando in the red bandanna). The controls consists of an eight-way joystick or directional pad and two action buttons for shooting (left) and jumping (right). When one of the protagonists jumps, he curls into a somersault instead of doing a conventional jump like in other games, similar to Ryu in Ninja Gaiden. The joystick controls not only the player’s movement while walking and jumping, but also his aiming. During side view stages, the player can shoot leftward, rightward or upward while standing, as well as horizontally and diagonally while running. The player can also shoot in any of eight directions, including downwards, while jumping. Pressing the joystick downwards while standing will cause the character to lie down on his stomach, allowing him to avoid enemy fire and shoot low targets. When the jump button is pressed while crouching on a higher platform, the player will drop down to a lower level.