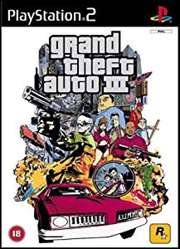 Ever fancied being a tooled-up hoodlum, living on the wrong side of the law and mixing it up with street gangs in a war over turf, drugs and cold, hard cash? Welcome to Grand Theft Auto 3 on the PlayStation 2. Big brother of previous outings on the PSone and PC, GTA 3 has gone fully 3-D to bring the fictitious environs of Liberty City to life. Any worries about graphical speed on the PS2 are quickly dispelled the first time you carjack a taxi and take off like a lunatic, mowing down the innocent and incurring the wrath of law enforcement. This is silky-smooth stuff and the graphical details are truly awesome–all the vehicles are fully deformable and ripping off car doors reveals a driver complete with steering wheels inside.

Sonically, GTA 3 cannot be beaten; in-car tunes are provided from one of nine radio stations, each with its own distinct feel, and the sounds of the city are all here too; walk around for a while and you’ll hear far-off police sirens, motorists abusing one another and general chit-chat as people go about their business.

The game is very open-ended. Its major focus is the mission-based goals–start out as a convict accidentally sprung from jail and work your way up to become a shining light in one of the city’s controlling gangs. If that gets dull, hijack a cab, police car, ambulance or fire engine and carry out missions suitable for your mode of transport, and if all else fails, find the ludicrously dangerous looking ramps and hit them hard for some big air and big cash bonuses.

It has to be said that GTA 3 fully warrants its 18 certificate, dealing as it does with mob warfare, indiscriminate murders, auto crimes, prostitution and more. The language gets a little “fruity” from time to time and you can’t help but wince as you watch innocents get in the way of a good firefight. At the end of the day, though, this is a game and nothing more; thankfully, it’s a good game, a very, very good game in fact, so buy it now. Or we’ll send Luigi and the boys round. –Chris Russell