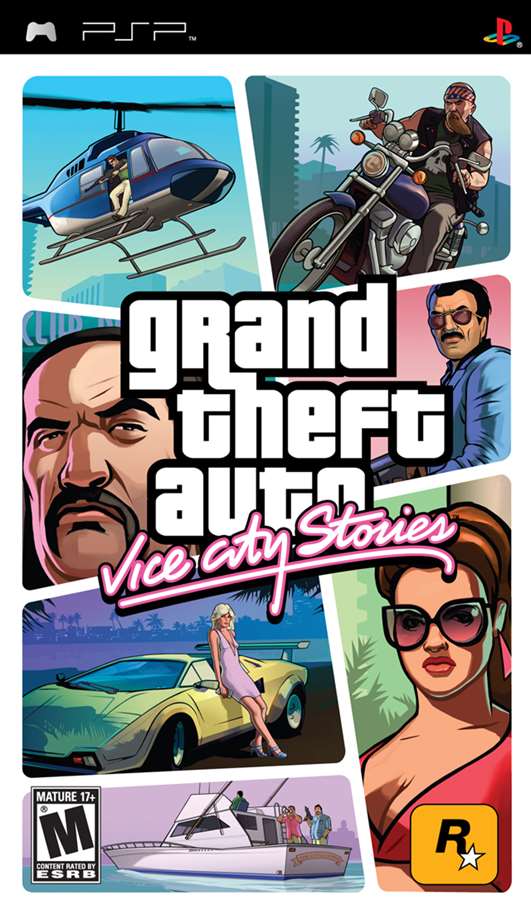 Grand Theft Auto: Vice City Stories is an action-adventure game set in an open world environment and played from a third-person perspective, structured similarly to other releases from the Grand Theft Auto series. The core gameplay consists of elements of a third-person shooter and a driving game, affording the player a large environment in which to move around. On foot, the player’s character is capable of walking, running, swimming, jumping, as well as using weapons and basic hand-to-hand combat. The player can drive a variety of vehicles, including automobiles, boats, planes, helicopters, jetskis and motorcycles.

The open, non-linear environment allows the player to explore and choose how they wish to play the game. Although storyline missions are necessary to progress through the game and unlock certain areas and content, they are not required, as the player can complete them at their own leisure. When not taking on a storyline mission, the player can freely roam game’s world. The player can also partake in a variety of optional side missions. The traditional side missions of the past games are included, but have been moderately upgraded and enhanced compared to previous titles. A new addition to the game is “Beach Patrol”, in which Victor (the player’s character) must deal with bikers on the beach by beach buggy (by ramming or shooting to knock them off their bikes) or throwing life preservers to drowning swimmers by boat or by taking a paramedic around to injured people on the beach.

One of the key gameplay elements in Vice City Stories is “empire-building”. New to the Grand Theft Auto series, it borrows a few ideas from Vice City’s “properties” and San Andreas’ “gang wars” systems. To make money, the player must open and operate various businesses on property taken over from enemy gangs – these can range from protection rackets to brothels or smuggling compounds; the type and scale of a business is entirely dependent on the player’s wants. For Vice City Stories, the combat system was overhauled. The targeting mechanism has been tweaked to “intelligently target”; enemies posing a threat or attacking the player will be targeted over pedestrians. The biggest changes concern the hand-to-hand combat system, as the player can now perform grappling moves and throws, and stand on top of enemies lying on the ground. The player is able to bribe policemen or hospital staff when “Wasted” (killed) or “Busted” (arrested) to lower their wanted level, and keep weapons that ordinarily would have been lost.

The standard hidden package system returns in the form of 99 red balloons scattered around the city.[1] This is a reference to Nena’s 1984 hit “99 Luftballons”, which was featured in Grand Theft Auto: Vice City. Improvements to the graphics since the release of Grand Theft Auto: Liberty City Stories include new animations, faster load times, a longer draw distance, reductions in clumping of pedestrians and vehicles, more complex explosions, and increases in the density of objects, vehicles, and NPCs.

Like the game’s predecessor, the PSP version of Vice City Stories features a multiplayer mode, for up to 6 players through WiFi ad-hoc mode (local area). The game features 10 different modes of wireless multiplayer gaming, which incorporate the use of automobiles, aircraft, and water-based vehicles. Various pedestrian and character models from the single player mode are available as player avatars. These multiplayer modes are not included in the PS2 version.