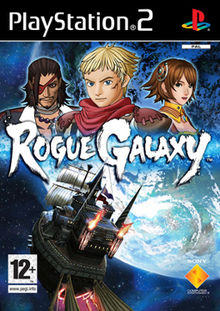 Rogue Galaxy (Japanese: ローグギャラクシー Hepburn: Rōgugyarakushī) is an action role-playing video game developed by Level-5 and published by Sony Computer Entertainment for the PlayStation 2. The game was released in Japan in December 2005, in North America in January 2007, and in most European countries and Australia in September 2007. A Director’s Cut of the game was released in Japan in March 2007, which includes all of the added features and improvements made for the North American and European localizations. In December 2015, the game was made available for the PlayStation 4 through the PlayStation Network.

The game follows the adventures of Jaster Rogue, a young agricultural worker living on an isolated planet, who becomes involved in a galactic conflict, and learns the fate of the entire galaxy lies in his hands. At the time of its release, Rogue Galaxy was the largest game Level-5 had ever developed, both in terms of the amount of staff working on it and the length of production (over three years). Both Level-5 and Sony had strong expectations for the game, hoping it would challenge the RPG market dominance of the Final Fantasy and Dragon Quest franchises.

Rogue Galaxy received generally positive reviews, with critics praising the graphics, range of side quests and scope of the game. Some, however, were critical of the plot and character development. Although the game went on to win several gaming awards, it did not sell as well as had been hoped, failing to meet Sony’s expectations of selling one million units.