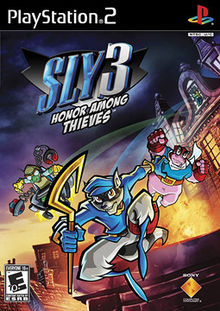 Sly 3: Honor Among Thieves is a platform stealth video game developed by Sucker Punch Productions for the PlayStation 2 in 2005. It is the third game in the Sly Cooper franchise. Sly 3 has optional 3-D stages, and comes with a pair of 3-D glasses inside the manual. The game received generally positive reviews from the gaming press.

On November 9, 2010, Sly 3: Honor Among Thieves was released on PlayStation 3 as part of The Sly Collection.

Gameplay
New variations in the game include additional playable characters besides those of Sly, Murray and Bentley. Firstly, Inspector Carmelita Fox is a playable character in some of the mini-games and a few times in the main game. Secondly, some new characters have been introduced, including a shaman named The Guru and a mouse named Penelope. Finally, characters from previous titles, such as Dimitri and the Panda King, are playable as well.

Furthermore, Bentley and Murray have the ability to pick-pocket in this game. Murray hoists stunned or unsuspecting guards above his head and shakes them down for coins and loot. The coins must be picked up off the ground after the guard is shaken. Bentley uses a fishing rod-like magnet to reel in coins and loot. When the magnet attaches, Bentley moves away from the guard to pick the pocket. Pickpocketed loot no longer needs to be sold back at the safe house. The amount an item is worth is added immediately to the coin count. Special treasure is absent from the over world.

The game also contains 3-D sections. 3-D glasses have been distributed with each new copy of the game, and are used in certain parts of the game. However, 3-D effects are optional, allowing the player to view the levels in standard 2-D instead. Some levels are playable in 3-D from the beginning, while other levels require the 3-D feature to be unlocked. The 3-D effect is focused upon certain objects in the background rather than the characters themselves, minimizing the necessary blue/red separation and making it easier for observers without 3-D glasses.