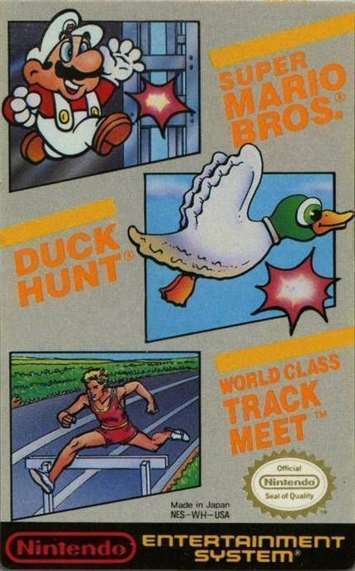 Super Mario Bros.
Super Mario Bros. is the best-selling Mario game and it was the selling video game of all time due to it being bundled with every NES bundle ever made (except the Deluxe Set and Basic Set). You play as Mario and Luigi on their adventure to save Princess Toadstool from the evil King Bowser.

Duck Hunt
Duck Hunt is one of 16 licensed NES games that use the NES Zapper . You and your trusty dog go hunting for ducks and try to shoot them after the dog chases them out using as few bullets as possible (you are allowed 3 tries per duck). An alternate game setting is Clay Pigeon, where you shoot at clay pigeons, but it is different from real life because you don’t yell “pull” (as it’s a video game), they just fire and you shoot them while the discs fly out of a launcher off-screen.