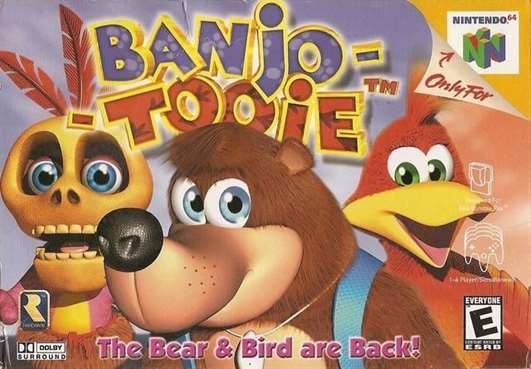 Banjo-Tooie is a platform video game developed by Rare and published by Nintendo for the Nintendo 64. It was first released on 20 November 2000[1] in North America and on 12 April 2001 in Europe, and later re-released as an Xbox Live Arcade game for the Xbox 360 on 29 April 2009. It is the second instalment in the Banjo-Kazooie series and serves as a sequel to the original Banjo-Kazooie. The story of the game follows series protagonists Banjo and Kazooie as they attempt to stop the plans of antagonist Gruntilda and her two sisters from vapourising the inhabitants of the game’s world.

Development of the game started in June 1998, directly after the release of its predecessor. Several new features were cut from the game due to time constraints and limitations of the Nintendo 64 hardware. Banjo-Tooie features levels that are significantly larger than those of its predecessor and requires the player to complete various challenges such as solving puzzles, collecting items, and defeating bosses. It also includes a multiplayer mode where up to four players can compete in several minigames. Upon release, the game sold more than three million copies and received critical acclaim from video game critics. The game is also included in the Rare Replay video game compilation, released for the Xbox One in 2015.