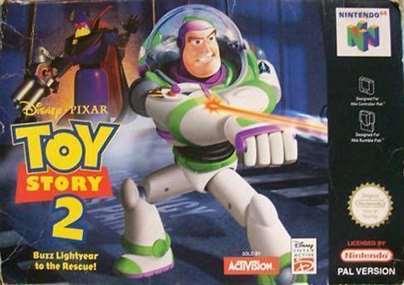 The game’s plot is relative to the Toy Story 2 film, and begins at Andy’s house as Al McWhiggin steals Woody from the family’s yard sale. Buzz Lightyear, Hamm, Rex, Slinky and Mr. Potato Head head out to find and rescue Woody. After leaving Andy’s house the toys enter the neighborhood in which Andy lives, then proceed to Al’s Toy Barn, the penthouse where Al lives and finally the airport terminal and tarmac where the movie ends. At the end of the game, Buzz has a final battle with Stinky Pete (a.k.a. the Prospector) and two of his in-game henchmen. Contrary to the movie, defeating Stinky Pete is the end of the game.